NEW YORK (April 12, 2017) – During the decades spent waking up early and heading to work, it’s understandable that Americans might view retirement as a light at the end of the tunnel. However, the retirement most Americans now envision is one of financial sacrifice, as the golden years run the risk of being tarnished without better planning. That’s according to a new telephone survey conducted for the American Institute of CPAs (AICPA) by Harris Poll in March 2017 among 1,018 adults in support of National Financial Capability Month.

The survey found that only 46 percent of non-retired Americans are confident they will reach their retirement goals, compared with 49 percent who are not confident (29 percent not sure, 20 percent don’t think they ever will). Only five percent of non-retired Americans reported that they had already reached their retirement goals.

This lack of overall confidence tracks with anxiety about the financial aspects of retirement – with two-in-five non-retired Americans (42 percent) saying they are either very anxious (14 percent) or somewhat anxious (29 percent). When these Americans were asked the specific cause of their anxiety, healthcare cost (71 percent), healthcare uncertainty (68 percent), affording everyday expenses and bills (67 percent), Social Security uncertainty (62 percent) and uncertainty over tax rates (52 percent) were all cited by more than half. In addition, figuring out how much money will be required in retirement (70 percent) and the overall difficulty of planning for retirement (54 percent) are causing anxiety for a substantial percentage of non-retired Americans.

“Saving for retirement is a marathon, not a sprint. By establishing a monthly budget and starting to build up savings early on, Americans will find themselves in a much better position later on,” said Greg Anton, CPA, CGMA, and chair of the AICPA’s National CPA Financial Literacy Commission. “The most important thing people can do in any financial environment is focus on what they can control and understand the role that their actions play in their retirement plan.”

The traditional ‘three-legged stool’ model of retirement planning involves Social Security, a pension and personal savings, including 401(k) and IRAs. The survey found that, among those currently retired, the model holds up well – with these Americans citing Social Security (61 percent), pension plans (36 percent) or cash or savings accounts (25 percent) as their top two sources of income in retirement.

However, for non-retired Americans, anxiety over Social Security and a sharp decrease in company pensions may have led to an increased emphasis on personal savings – leaving the three-legged stool a bit unstable. Overall, for non-retired Americans the percent who anticipate relying upon Social Security (48 percent) or a pension plan (17 percent) as one of their top two primary sources of income differs significantly, with a more likely dependence on cash or savings accounts (39 percent). And non-retired Americans are more than three times as likely as those who are retired to say they expect to rely upon a 401(k) (43 percent vs. 14 percent) as one of their two primary sources of income during retirement.

“Working throughout your life was once a reliable route to a comfortable, financially secure retirement. Over the years, Americans have been asked to take on more responsibility and become more self-sufficient when it comes to their retirement planning,” said Anton. “We’ve found that today, even Americans who say they’ll reach their financial goals are anticipating a more active ‘retirement-lite’ that involves working and making financial sacrifices.” 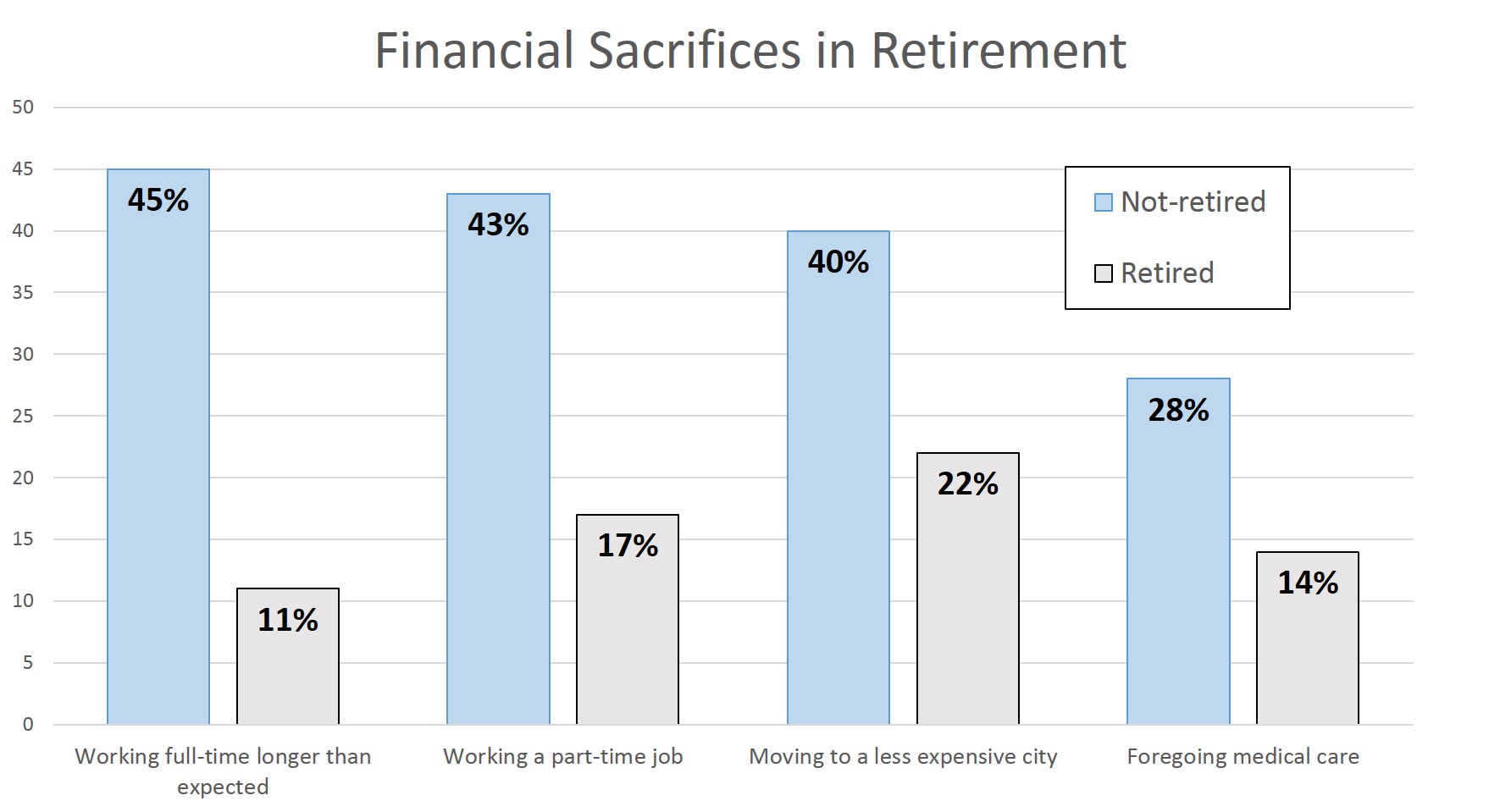 360 Degrees of Financial literacy (www.360finlit.org) is a national volunteer effort of the nation’s Certified Public Accountants to help Americans understand their personal finances and develop money management skills. The AICPA and Ad Council have developed the Feed the Pig program (Feed the Pig), a national and localized PSA campaign designed to improve financial literacy among Americans aged 25–34 by encouraging them to make savings a part of their daily lives. 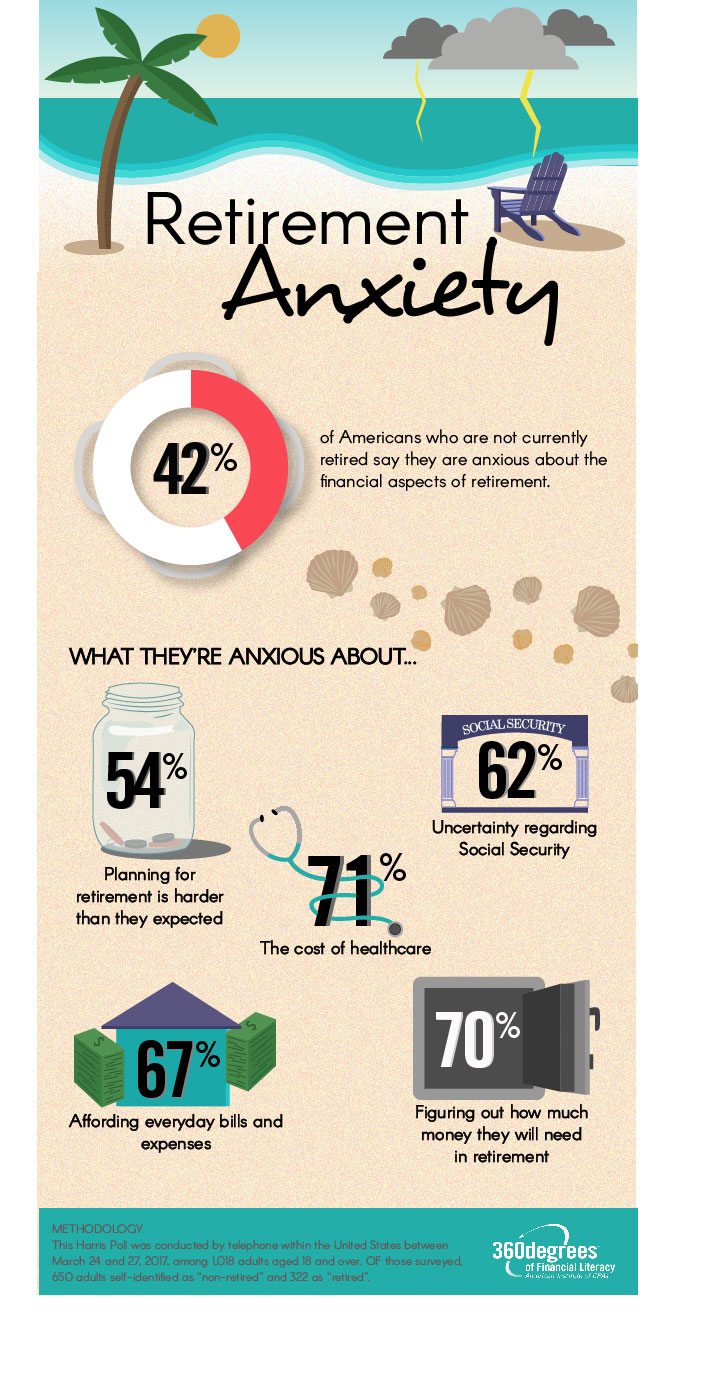 Survey Methodology
This Harris Poll was conducted by telephone within the United States between March 24 and 27, 2017, among 1,018 adults (505 men and 513 women aged 18 and over) including 518 interviews from the landline sample and 500 interviews from the cell phone sample. 650 adults self-identified as “non-retired” and 322 as “retired”. Figures for age, sex, race/ethnicity, education, region and household income were weighted (using data from the Current Population Survey) where necessary to bring them into line with their actual proportions in the population.