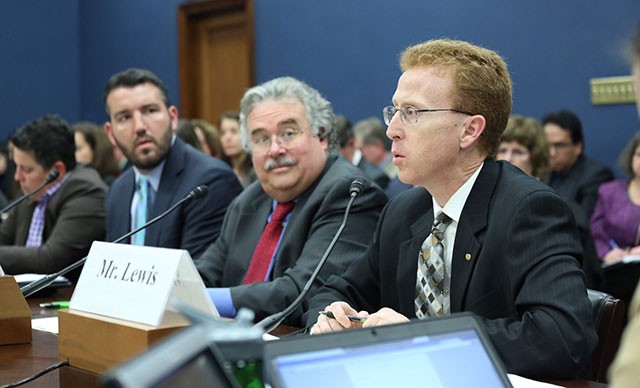 Troy K. Lewis testifies, at right, as other witnesses look on.

The American Institute of CPAs (AICPA) urged Congress to pass H.R. 2315, the Mobile Workforce State Income Tax Simplification Act of 2015, at a hearing on April 13 before the House Small Business Committee Subcommittee on Economic Growth, Tax and Capital Access.  The hearing explored how the tax code could be simplified to help small businesses.

Troy K. Lewis, CPA, CGMA, chair of the AICPA Tax Executive Committee testified, “The AICPA strongly supports H.R. 2315.  We believe the bill is an important step towards state tax simplification for small businesses.  It would provide relief, which is long-overdue, from the current web of inconsistent state income tax and withholding rules on nonresident employees.”

“Having a uniform national standard for nonresident income taxation, withholding and filing requirements will enhance compliance and reduce unnecessary administrative

burdens on businesses and their employees,” Lewis said.  “In addition to uniformity, H.R. 2315 provides a reasonable 30-day de minimis exemption before an employee is obligated to pay taxes to a state in which they do not reside.”

Lewis offered examples of why the rules are burdensome and bewildering to small businesses and their employees:

Some states tax wages even if the employee only works in that state for one day.

Some states provide a de minimis number of days or a de minimis earnings amount before employers must withhold tax on employees’ wages, but the thresholds are not consistent from state to state.  For example, individuals are subject to state tax withholding after working 59 days in Arizona, 15 days in New Mexico or 14 days in Connecticut.

Some, but not all, states exempt income earned from certain activities such as training or attendance at meetings.  Furthermore, the exemptions sometimes only cover the employer’s withholding requirement. The employees may still be required to file or pay a tax in that state.

While about one third of the states have reciprocity agreements with bordering states to not tax the wages of another bordering state’s employees, Lewis noted that the agreements are primarily geared toward employees who ordinarily commute a few miles a day to a particular adjoining state.  For example, he said, Virginia provides reciprocal withholding agreements with several states, but California, Kansas, Mississippi and New York do not have any reciprocity agreements.

Lewis said that the financial impact to most of these states is minimal.  “After taking into consideration their costs for processing nonresident tax returns, we believe these states receive only a minimal benefit – if any – from forcing out-of-state employees to file a return for just a few days of work,” he stated.

Lewis praised the sponsors of H.R. 2315, Representatives Mike Bishop (R-Mich.) and Hank Johnson (D-Ga.), for “reaching a reasonable balance between the states’ rights to tax income from work performed within their borders and the needs of individuals and businesses to operate efficiently in this economic climate.”

“This legislation should be passed as soon as possible,” Lewis said.