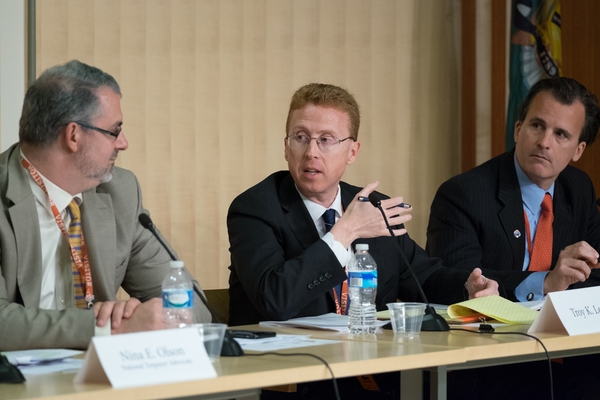 Timely and meaningful access to the Internal Revenue Service (IRS) is what’s most important to taxpayers and tax preparers, Troy K. Lewis, CPA, CGMA, chair of the American Institute of CPAs’ (AICPA) Tax Executive Committee, testified at the May 17 public forum on “What Taxpayers Want or Need from the IRS to Comply with the Tax Laws,” which was hosted by National Taxpayer Advocate Nina E. Olson in Washington, D.C.

Among the specific technology suggestions Lewis made were multiple options for contacting the IRS, such as calling, emailing or access through a secure on-line portal, as well as video chat.  “When you must rely on old-fashioned letters, interacting with the IRS is a slow process,” he said.

In addition, Lewis said, the IRS should provide a fully-integrated electronic system, such as online accounts similar to what some states use (for example, California’s MyFTB).  And, in the interest of efficiency, he said, the IRS should focus on developing and improving practitioner tools, such as online account resolutions and options to submit a Power of Attorney.

A critical component of ensuring meaningful access to the IRS is regularly providing a systematic, reliable and economical source of training to their employees, Lewis stated.  “In order to answer basic questions and to keep up with changing tax laws, IRS representatives need consistent, quality training, comparable to that offered to a tax practitioner.  This lack of training often results in poor customer service,” he said.

Finally, Lewis testified, “It is critical that the IRS actively pursues stakeholder (taxpayer, tax preparer and other IRS customers) engagement, particularly on major organizational changes such as the IRS Future State.  Stakeholders such as CPAs, who are on the ‘frontline,’ can provide sound recommendations to ensure the needs of taxpayers, tax practitioners and the government are met.”  Lewis explained that the AICPA received an initial briefing of the IRS Future State initiative and said that “while we are encouraged with the overview that was shared with us, we strongly believe continued stakeholder involvement during the decision making process is essential.  We all have a vested interest in the success of the IRS.”

The event was one of the series of public forums hosted by Olson around the United States to seek comments and suggestions from the public. For more details about the May 17 public forum, read the Journal of Accountancy article.