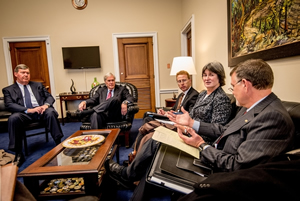 AICPA tax advocacy staff and member volunteers took part in a recent fly-in to our nation’s capital to meet with Members of Congress and the IRS to discuss the unacceptable state of taxpayer service and to launch a dialogue about the IRS of the future.

By shining a light on poor Internal Revenue Service (IRS) taxpayer service, the American Institute of CPAs(AICPA) helped pave the way this past December for Congress to approve $290 million in additional funding for the IRS to address identity theft and taxpayer services.  But it was only a first step, according to AICPA Vice President for Tax Edward Karl.

Over the course of two days, February 9 and 10, the delegation met with key members of the House Ways and Means and Appropriations Committees and the Senate Finance Committee.

“When we relayed some of our experiences and the stories we’ve heard from other practitioners, it really resonated with them,” Lewis remarked.  “Members of Congress recognized that it’s not only AICPA members who are having trouble, it’s our members having trouble serving their clients.”

“We constantly hear about the IRS’ telephone service,” said Porter.  “But what I find even more frustrating is the issue of correspondence.  You send a letter, they send you back a notice that takes 45 more days.  And in the meantime, clients are getting notices with additional penalties and interest.  That hampers my client relationships because they can’t understand why it takes six months to fix a very simple problem.”

In response to IRS service woes that have plagued the profession, the AICPA governing Council last year passed a resolution calling upon national policymakers to create a forum in which stakeholders could explore ways for the IRS to become a more effective agency.

The fly-in, which also included a meeting with IRS Commissioner John Koskinen, was intended to forge a path towards the evolution of the IRS, according to participants.  They also discussed the IRS’s plans for operationalizing the additional funding the IRS received to support services.

Nellen said, “I think the IRS needs to – as the AICPA has promoted – engage their stakeholders, see what their needs and concerns are, and talk to others in the financial industry and consumer services area.  The technology exists for these financial transactions.  The IRS needs to be moving in that direction.”

Lewis sees the AICPA playing a very proactive role as the dialogue continues.  “We’re on the front lines, we’re the ones interfacing with the taxpayers.  There is virtually no other organization with direct access to taxpayers that can explain what consumers need or want.  And by raising our voice collectively, or as individual members, that’s how we’re going to help deliver the solutions needed to modernize the IRS that will allow us to serve our clients.”

For his part, Karl is assuring AICPA members that the Institute is determined to work with Congress and the IRS to resolve this issue.  “We intend to be part of the continuing dialogue about transforming the agency,” he explained.  “In the meantime, rest assured we are doing everything in our power to make this a successful tax season.”

In addition to Karl, the following AICPA staff participated in the visits: Melissa Labant, director of tax advocacy, and Melanie Lauridsen, senior manager of tax advocacy, as well as Rachel Dresen, Diana Deem and Brady King, directors of congressional and political affairs.