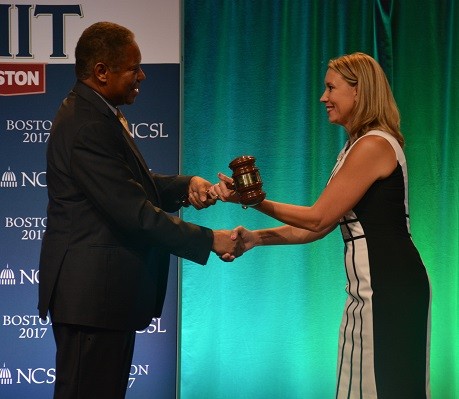 South Dakota State Senator Deb Peters, CPA, assumed her new role as the President of the National Conference of State Legislatures (NCSL) at the organization’s 2017 Legislative Summit in Boston earlier this month.  NCSL is a bipartisan organization that supports state lawmakers and provides policy makers with opportunities to exchange ideas on the most pressing state issues.

While at the Summit, Senator Peters said that she is looking forward to the year ahead as President and emphasized that it is “vital for states to have a voice in Washington, D.C.”

During her time as Senator, she has focused on education and budget issues as well as a broad range of tax issues, including being the leader on the effort to collect online sales tax. Senator Peters is especially active on NCSL’s Task Force on State and Local Taxation.

Laura Coome, executive director of the South Dakota CPA Society, said, “We are thrilled for Senator Peters on becoming the President of NCSL.  It is truly exciting to have her lead such a prestigious organization.  She is an outstanding legislator and an effective voice for the CPA profession.”