More than Half of Business Executives Predict a Negative Impact on Their Companies if A New Round of Economic Stimulus Fails to Pass in Next Few Months, AICPA Survey Finds

NEW YORK (Dec. 10, 2020) – More than half of business executives (54 percent) say they expect some negative impact to their organizations if a renewed round of economic stimulus does not materialize by early 2021, according to the fourth-quarter AICPA Economic Outlook Survey. The survey polls chief executive officers, chief financial officers, controllers and other certified public accountants in U.S. companies who hold executive and senior management accounting roles.

Just over a third of survey respondents (34 percent) said a stimulus package would have no impact on their company’s fortunes. Seven percent predicted a positive impact, while five percent said they weren’t sure what consequences would emerge.

Timing of the implementation of stimulus is also important: 23 percent of business executives said it would have to come in the next month or two to be effective

Despite rising cases of COVID-19, business executives had an improved outlook on the U.S. economy this quarter, with 37 percent expressing optimism about prospects over the next 12 months, compared to 24 percent last quarter. Survey takers’ optimism about the outlook for their own companies also rose from 41 percent to 49 percent. Both indicators continue to show wariness about economic conditions, however.

“Business executives overwhelming say containment of the pandemic is the most important thing government can do right now to help them, eclipsing renewed stimulus, business relief or keeping taxes and regulation in check,” said Ash Noah, CPA, CGMA, managing director of CGMA learning, education and development for the Association of International Certified Professional Accountants. “There are signs of optimism from our survey respondents that some answers lie ahead on the pandemic -- stronger profit and revenue expectations, for example, and a better hiring outlook.” 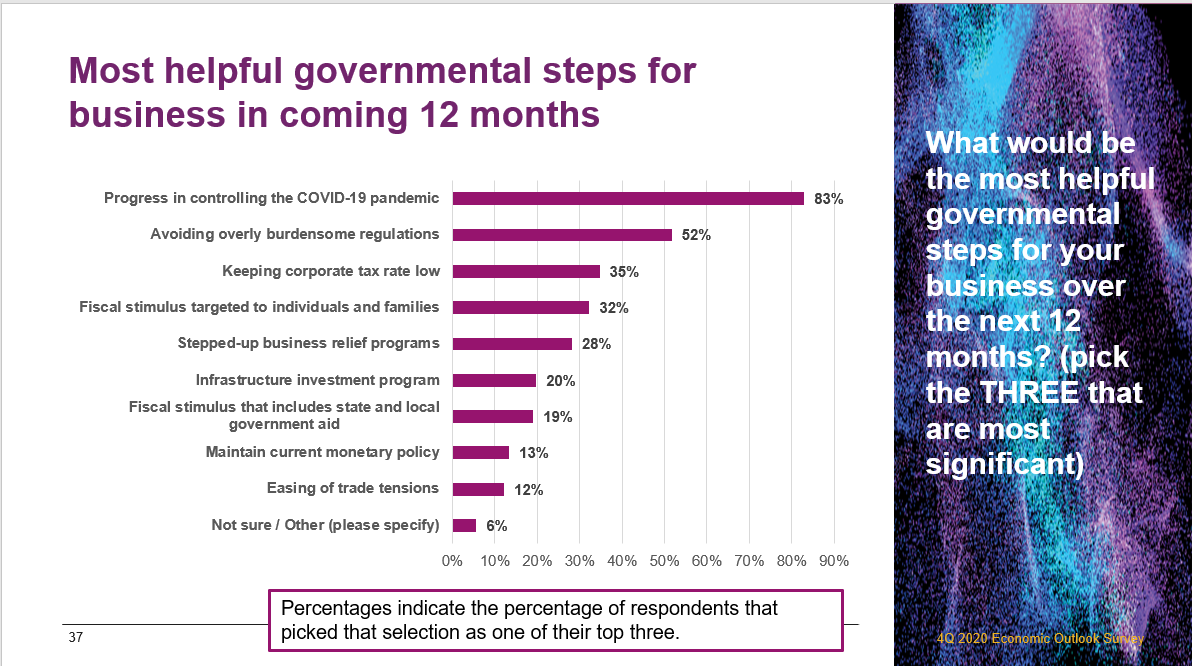 Some 55 percent of business executives say their companies are back to – or exceed – pre-pandemic staffing levels, with another 13 percent expecting to get there within 12 months. This isn’t evenly distributed, however, as the hospitality and leisure sector, for one, continues to show contraction. Some 14 percent of companies say they don’t expect to get back to pre-pandemic staffing levels for several years.

In the near term, 17 percent of business executives said their companies planned to hire immediately, up from 13 percent last quarter and 7 percent in the second quarter.

The AICPA survey is a forward-looking indicator that tracks hiring and business-related expectations for the next 12 months. The CPA Outlook Index—a comprehensive gauge of executive sentiment within the AICPA survey— rebounded into positive territory. It now stands at 62, up from 54 last quarter. The index is a composite of nine, equally weighted survey measures set on a scale of 0 to 100, with 50 considered neutral and higher numbers signifying positive sentiment.

Other key findings of the survey:

The fourth-quarter AICPA Business and Industry Economic Outlook Survey was conducted from Nov. 10 to Dec. 2 and included 740 qualified responses from CPAs who hold leadership positions, such as chief financial officer or controller, in their companies. The overall margin of error is less than 3 percentage points. A copy of the report can be found on aicpa.org.

About the American Institute of CPAs

The American Institute of CPAs (AICPA) is the world’s largest member association representing the CPA profession, with more than 431,000 members in the United States and worldwide, and a history of serving the public interest since 1887. AICPA members represent many areas of practice, including business and industry, public practice, government, education and consulting. The AICPA sets ethical standards for its members and U.S. auditing standards for private companies, nonprofit organizations, and federal, state and local governments. It develops and grades the Uniform CPA Examination, offers specialized credentials, builds the pipeline of future talent and drives professional competency development to advance the vitality, relevance and quality of the profession.

About the Association of International Certified Professional Accountants

The Association of International Certified Professional Accountants (the Association) is the most influential body of professional accountants, combining the strengths of the American Institute of CPAs (AICPA) and The Chartered Institute of Management Accountants (CIMA) to power trust, opportunity and prosperity for people, businesses and economies worldwide. It represents 650,000 members and students across 179 countries and territories in public and management accounting, and advocates for the public interest and business sustainability on current and emerging issues. With broad reach, rigor and resources, the Association advances the reputation, employability and quality of CPAs, CGMAs and accounting and finance professionals globally.