NEW YORK (Apr. 12, 2016) – Helping to insure that the Social Security system will not run out of money should be the top economic issue addressed by the next U.S. President, according to a new telephone survey of 1,005 U.S. adults conducted in March by Harris Poll on behalf of the American Institute of CPAs  (AICPA) for Financial Capability Month.  Almost two-in-three (64 percent) U.S. adults cited social security as the top issue, underscoring the importance of the program to Americans in retirement.

Social Security was followed by reducing the federal deficit (44 percent), decreasing unemployment (38 percent), reducing taxes (36 percent), and decreasing the international trade deficit (25 percent) as top economic issues the next president should address.  While one-in-five (22 percent) cited keeping interest rates low, there was a small group (4 percent) who thought the next President should increase interest rates.

“Our survey clearly demonstrates that people feel strongly about the solvency of Social Security and the potential impact on their own retirement security,” said Gregory Anton, CPA, CGMA, chair of the AICPA’s National CPA Financial Literacy Commission.  “The earlier people start saving for retirement, and the more they contribute to their retirement accounts, the better financial shape they will be in. That way Social Security can supplement their retirement savings rather than serve as the sole component.”

“While the outcome of elections have the potential to impact American’s economic situation –people need to understand that they themselves have the ability to make positive changes in their financial behavior,” added Anton. “The tools and resources on the AICPA’s 360 Degrees of Financial Literacy website empower people to understand their finances and take steps to improve their saving and spending habits to better position themselves for a comfortable retirement.”

Among the tools and resources on the AICPA’s 360 Degrees of Financial Literacy website are Social Security calculators to help determine what their benefits may be in retirement, and determine the impact of losing benefits upon their retirement income.

The AICPA’s National CPA Financial Literacy Commission offers the following tips to help Americans save for a more comfortable retirement.

In addition to serving as Chair of the AICPA’s National CPA Financial Literacy Commission, Greg Anton is also is founder of the AICPA’s “What’s at Stake” initiative. What’s at Stake offers guidance on how the U.S. government’s financial statements can be used for greater understanding of the nation’s fiscal health.

For more information on the AICPA survey or to speak to a member of the AICPA’s National CPA Financial Literacy Commission, contact Marc Eiger at 212-596-6042, meiger@aicpa.org or James Schiavone at 212-596-6119, jschiavone@aicpa.org. 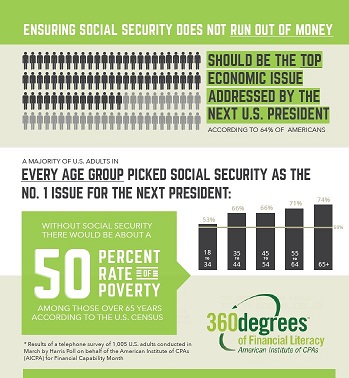 360 Degrees of Financial literacy (www.360finlit.org) is a national volunteer effort of the nation’s Certified Public Accountants to help Americans understand their personal finances and develop money management skills.  The AICPA and Ad Council have developed the Feed the Pig program (Feed the Pig), a national and localized PSA campaign designed to improve financial literacy among Americans aged 25–34 by encouraging them to make savings a part of their daily lives.