NEW YORK (Apr. 21, 2016) – Tax time is busy season for CPAs – but it’s also busy season for criminals looking to steal identities and fraudulently obtain refund checks. Americans are highly aware of the threat of losing money to scammers, with half of U.S. adults (50 percent) saying that it is at least somewhat likely they will suffer some financial loss in the next year due to identity theft--and one in 10 (10 percent) say it is very or extremely likely. That’s according to a new telephone survey of 1,005 U.S. adults conducted in March by Harris Poll on behalf of the American Institute of CPAs for Financial Capability Month.  The survey also found that in the past year more than one in five Americans (21 percent) have suffered identity theft or attempted identity theft.

The good news is that the vast majority of Americans (93 percent) affected by identity theft took action to fix it.  Approximately three in four (72 percent) contacted their credit or debit card company to set up additional protections and half (50 percent) used cash or checks more often.  Other steps taken were eliminating or decreasing usage of online financial transactions (46 percent), putting a freeze on their credit report (29 percent), and using alternative currencies like Bitcoin (10 percent).

“There are basic steps people can take right now, before identity theft causes a financial nightmare. Securing your personal information and only providing your social security number when it is absolutely necessary are easy steps to take,” said Gregory Anton, CPA, CGMA, chair of the AICPA’s National CPA Financial Literacy Commission.  “In addition, there are a variety of different investment frauds schemes that have the potential to cause major financial harm. A basic rule for any investment is that if it seems too good to be true – it probably is.”

Being proactive can help mitigate the threat of a financial loss resulting from identity theft. Helping to prevent losses from investment fraud requires a similar approach – and a healthy dose of skepticism. Since investment fraud involves an active decision to put money at risk, often times with friends or family, reporting it can seem like a difficult decision.

“Americans who are victimized by investment fraud or identity theft should alert the proper authorities, regardless of the circumstances” added Anton. “By reporting the crimes, they are increasing the chance that the scammers will be brought to justice and reducing the risk that they will target others in the future.”
The survey found that almost one in five (19 percent) Americans have been victimized by investment fraud.  The scams most often cited were Ponzi or pyramid schemes (six percent), closely followed by a fraudulent IRS tax return or refund scam, unrealistically high guaranteed investment returns, collectibles, get rich quick seminars (four percent each), and email requests for money (three percent).

The AICPA’s National CPA Financial Literacy Commission offers the following tips to prevent or mitigate the effects of identity theft and investment fraud and information on who to contact if you are victimized. 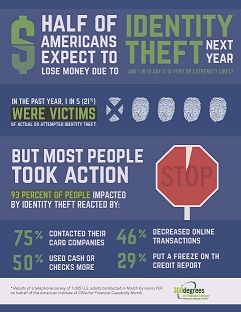 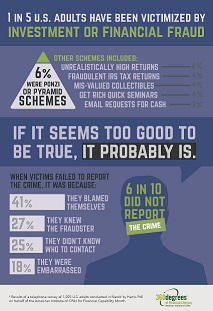 For more information on the AICPA survey or to speak to a member of the AICPA’s National CPA Financial Literacy Commission, contact Marc Eiger at 212-596-6042, meiger@aicpa.org or James Schiavone at 212-596-6119, jschiavone@aicpa.org.

360 Degrees of Financial literacy (www.360finlit.org) is a national volunteer effort of the nation’s Certified Public Accountants to help Americans understand their personal finances and develop money management skills.  The AICPA and Ad Council have developed the Feed the Pig program (Feed the Pig), a national and localized PSA campaign designed to improve financial literacy among Americans aged 25–34 by encouraging them to make savings a part of their daily lives.

Methodology
Harris Poll has conducted an annual survey for the AICPA since 2007.  This year’s poll was conducted by telephone within the United States between March 18 and March 27, 2016, among 1,005 adults (517 men and 488 women aged 18 and over), including 499 interviews from the landline sample and 506 interviews from the cell phone sample.